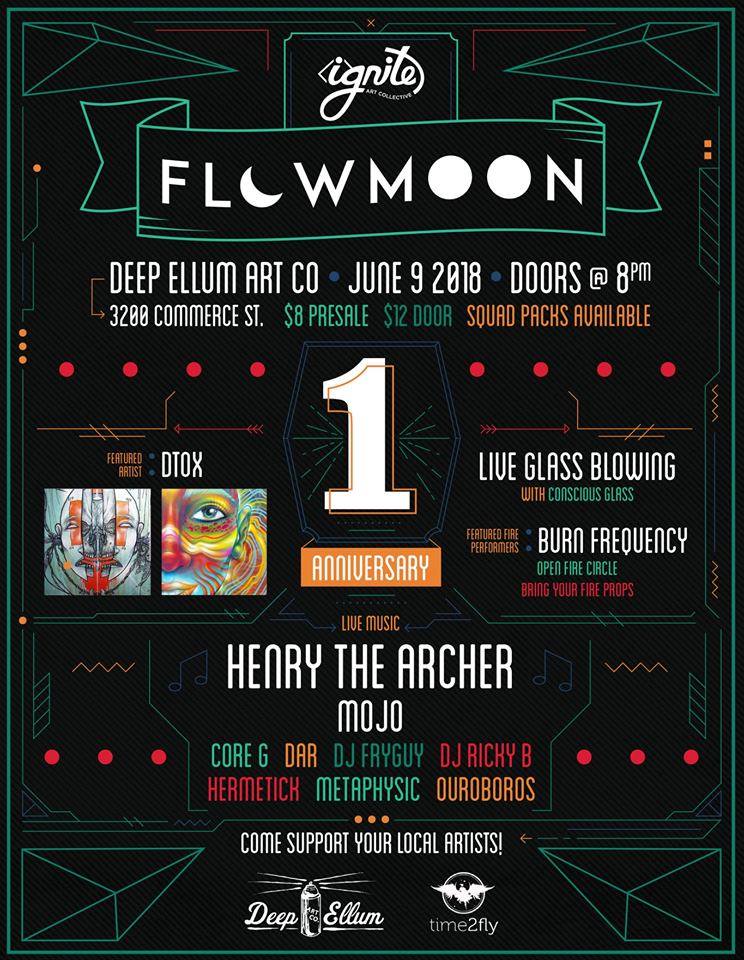 That’s right ladies and gents; Flowmoon will officially hit the one year mark in June! From Brian Brujo ‘s brain to David ‘Dar’ Carroll ‘s backyard, to Deep Ellum Art Company. Flowmoon has grown so much in such a short time. Come celebrate hard work and our beautiful budding community!

Tickets available at the link below:
https://prekindle.com/event/99816-flowmoons-one-year-anniversary-june-9-dallas

Headlining the evening will be Henry the Archer:

Jerod “DTOX” Davies is a multi-faceted artist that enjoys bringing ideas and dreams to life.
A commission artist and muralist by trade his style is vivid and ornate. Heavily influenced by texture and light, his work evokes a spectrum of feelings and reaction.
Recently the winner of the Pabst “Design The Can” national artcan contest, his artwork is currently on 6 million 16oz. Tallboys nationwide.
DTOX repping BLUNT.FORCE.CREW also holds the title for largest spraypaint mural in Dallas county! /22x280ft./
A Nationally ranked bodypainter as well as a bodypaint instructor at CMC makeup school, Jerod enjoys contributing to this ancient art form and presenting it to a whole new audience and generation eager to learn themselves.
He is also known for his local community work in North Texas as well as collaborating with Jean Paul Gaultier on his retrospective in 2011 at the DMA.
See more of his work at www.thejerod.com
and follow his adventures at www.instagram.com/dtoxart