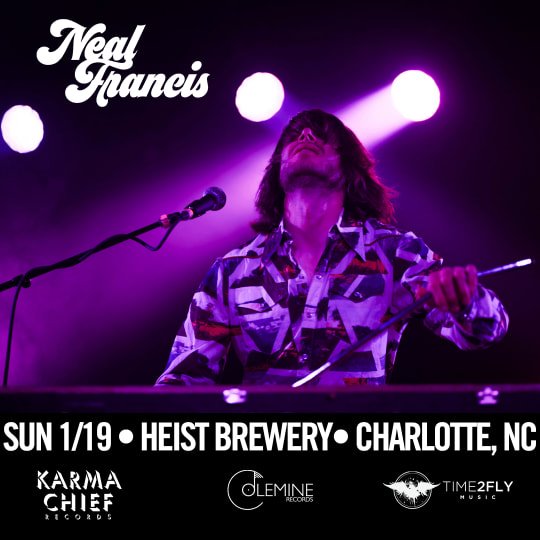 There is a deep connection between Francis’s childhood—his obsession with boogie woogie piano, his father’s gift of a dusty Dr. John LP—and the songs he’s created. The result is an astonishing collection of material without parallel in the contemporary funk and soul scene. The influences are unmistakable: the vocal stylings of Allen Toussaint and Leon Russell; the second line rhythms of The Meters and Dr. John; the barroom rock ‘n’ roll of The Rolling Stones; the gospel soul of Billy Preston; the roots music of The Band. Francis pays tribute to the masters but has his own story to tell: “It’s the life I’ve lived so far.”

Colby Dobbs Band (CDB) has been steadily increasing their fanbase, catalog of songs and overall momentum since the group’s inception that brought together an original mix of piano-driven, jazz-influenced pop songs in 2010. Colby Dobbs Band was formed by lead singer/keyboardist Colby Dobbs and bassist David J. Sentendrey after the two had previously worked on a project at a church outside Charlotte, North Carolina.

Both Dobbs and Sentendrey were looking to put their time, energy and talents into an original project that could appeal to a diverse audience and most importantly, produce songs that they could be enthusiastic about — and not just because they were their own. Colby Dobbs Band’s original lineup produced their debut album, “The Great Unknown,” which debuted in spring 2012. The album showcases the group’s ability to write pop music with catchy hooks, while maintaining song structures that can be sophisticated and unique for their era.

The group has since added Curtis Wingfield (drums), Marcus Harmon (saxophone) and Charlie Trexler (guitar) to round out their sound and most importantly, add a new sense of energy to their live sound that will be driving them into a music room near you…

“On stage there were sounds being crafted unlike anything heard in the local music scene. The musicianship was apparent but not in-your-face, the songs were expertly crafted and the band was clearly having the time of its life.” — Nick Dorney, Niner Online

“The reason I like this one (‘The Great Unknown’) so much is the fact that it has the three components that all great songs need; innovation, catchy lyrics, and great music.” — Vinny Sciascia, The Under-Cover Album Review

“…I’m going to stop here and say that this is one of the best local bands in Charlotte.” — Stan Cocheo, PMCR Radio Host

“Wow! That is my initial gut reaction to my experience of a live show by Colby Dobbs Band…It is obvious that this group is serious about what they do and their goal is creating amazing music that will appeal to a lot of people.” — Stephen Coombs, Live Limelight

“All and all, The Colby Dobbs Band is a well-rounded group with depth that takes them a step further than many groups that do “the funk thing”. No stand out rock stars or crazy antics. Mostly authentic vintage mood and good songwriting.” — Charlotte Musicblog