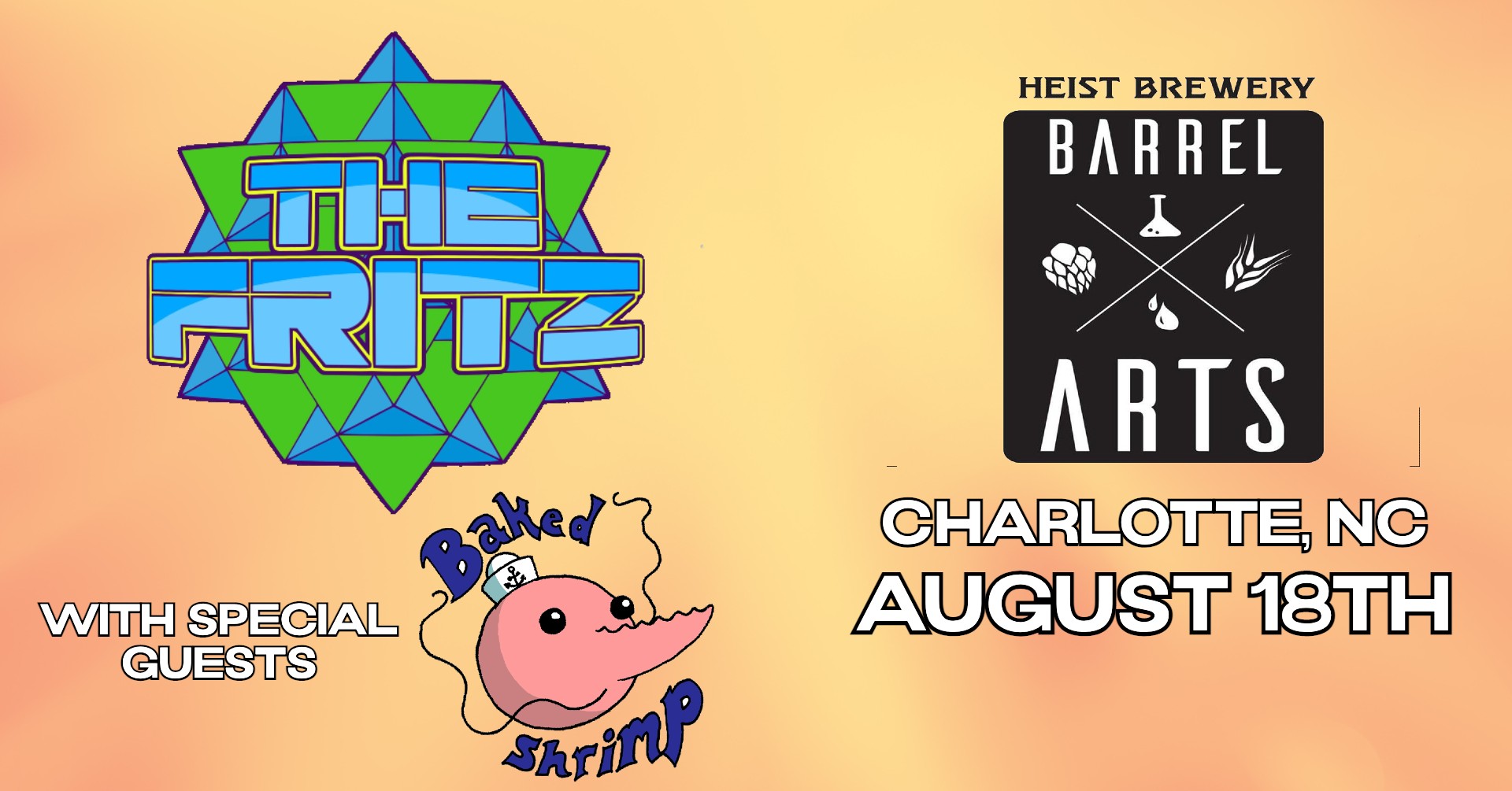 Time2Fly Music & Records On The Wall Present – The Fritz and Baked Shrimp team up for a show at Heist Barrel Arts in Charlotte, NC on August 18th!
All Ages
Doors 7
Baked Shrimp 8
The Fritz – 9:15
Artist Bio’s —
The Fritz:
The Fritz is a soul-driven psychedelic funk band hailing from Asheville, NC.
The group’s aggressive approach to funk, soul, and rock creates a sound that is uniquely their own. Their high-energy, danceable songs provide a platform for each member to shine. With powerful vocals, climactic solos, and tight grooves, The Fritz has built a devoted following and is captivating audiences everywhere.
The newest lineup features Datrian Johnson on lead vocals, who has propelled the group to new heights. Many may know Datrian from his work with legendary organist John Medeski’s Saint Disruption. Datrian is a force, and the immediate chemistry with songwriter/music director/guitarist Jamie Hendrickson and drummer Michael Tillis is clear. The group also welcomes funk machine Thomson Knowles, as well as long-time Fritz collaborator, Matt Schueler.
The band is currently in the process of recording their 3rd full length album. Check them out on tour in 2022!
Baked Shrimp:
In five short years, high-octane power funk trio Baked Shrimp has become a top up-and-coming artist in the jam scene. The high energy young talents Jared Cowen (Guitar/Vocals), Scott Reill (Bass/Vocals), and Jager Soss (Drums/Vocals) from Long Island, NY keep it fresh from night to night with their repertoire of over one-hundred original songs and have performed over two-hundred concerts on their many extensive tours throughout the east coast and mid-west. Baked Shrimp has provided direct support for artists such as Aqueous, Mihali (from Twiddle), Kung Fu, Freekbass, and more. In the past year they have also become a well-known name in the festival circuit. Highlighted festivals include Adirondack Independence Music Festival, Catskill Mountain Jubilee, Great South Bay Music Festival, Memorial Meltdown, Some Kind of Jam, Karnival of the Arts, and their very own hosted LonCon festival.
Baked Shrimp founded LonCon in 2021 following the passing of their most loyal supporter and ambassador, Lon “Conscious” Gellman. The initial festival was announced during a virtual music festival live stream called “Live for Lon” which featured a live Baked Shrimp set in addition to performances submitted by members of Twiddle, Brandon “Taz” Niederauer, Andy Frasco, and more. The event raised $2,700 for White Light Foundation. The inaugural LonCon festival took place in August of 2021 at legendary Arrowhead Ranch in Parksville, NY. In 2022, Baked Shrimp will bring the festival to Yasgur Farm in Bethel, NY and feature artists such as lespecial, Cabinet, Dogs in a Pile, members of Trey Anastasio Band, Goose, the Disco Biscuits, and more, with two headlining performances by Baked Shrimp.
Despite Baked Shrimp’s very intense touring schedule, the trio has managed to find time to release five official albums in the timespan of five years. The band’s 2021 release of Conscious received high praise by media outlets such as LiveForLiveMusic, Grateful Web, The Sound Podcast with Ira Haberman, and more. After a quick release of a three-disc live album The Prawno Tapes, Vol. 1, Baked Shrimp went back into the studio to finish their early-2022 release Pork Etiquette. Pork Etiquette was featured on JamBase’s Release Day Picks which highlighted five other albums, four of which were by Vulfpeck, The Weeknd, Lotus, and Cory Wong. Baked Shrimp celebrated the release of Pork Etiquette with a virtual release party in New York City at Relix Studio. The performance was live streamed on Relix’s Twitch Channel to their 40k followers, and featured The Horn Section (members of Turkuaz).
With a goal of 100 shows in 2022, Baked Shrimp prepares to head out on the road for a 50+ date Summer Tour. The band is already well on their way to achieving their goal after starting the year with a 30-date Winter/Spring Tour in which the young trio performed at well-known venues such as Brooklyn Bowl, Cafe Wha?, and The Westcott Theater. Baked Shrimp is constantly turning heads and has moved from “Long Island’s best kept secret” to the hardest working band in the business, a secret impossible to keep